Scenes from "Men in Black", "Close Encounters of the Third Kind", and "Earth Versus the Flying Saucers."

Bottom (and top) line: there is no credible evidence that extraterrestrials have visited earth.

Despite this, millions of people believe in aliens, UFOs, and other pseudoscience offerings like astrology and dowsing for water.

In prehistoric and early historic times, all events were caused by "the Gods". In biblical times, demons and angels did the things ascribed to aliens today: abduct us, mess with our minds, make us sick, enter us, possess us, or, on the angelic side, save us, protect us, show us wisdom, show us "the way", give us messages from God or another world.

I promise not to quote Carl Sagan too much, but in his The Demon-haunted World (Call number Q175.S215 1995 in the EWU JFK stacks) he exhaustively documents the astonishing parallel between the demons, angels, and fairies of the past with the extraterrestrial aliens of today. It ain't proof, but it strongly suggests that we are dealing with human psychology, not creatures from planet X.

Strange sky phenomena have been seen throughout history, but flying saucers did not appear until Kenneth Arnold (below) was misquoted by reporters in 1947. He actually saw V-shaped objects that were "flying like a saucer would if you skipped it across the water."

But shortly after the term "flying saucer" appeared in print, there were many flying saucer sightings, a craze that lasted a couple of decades (in my view, finally eclipsed by Lucas/Spielberg films). Here are some examples:

Captions: (1) George Adamski, who liked to call himself "professor" and imply that he worked at the Mount Palomar Observatory. He actually worked at a hot dog stand at the foot of Mount Palomar. He claimed many close encounters with aliens. (2) An Adamski photo of a "scout ship" [skeptics say: almost certainly the top of a 1937 canister-type vacuum cleaner]. (3) An Adamski photo of a "mother ship" with some scouts. Adamski spoke several times with the Venusians inside. (4) Photo supposedly taken at 2:20 p.m. April 2, 1966 in Balwyn Australia. Probable fake [UFO and ground are blurred differently, plus a discontinuity across the sky indicates two photos pasted together and rephotographed]. (5) One of a 1952 series of photographs taken at Barra da Tijuca, Brazil. It's as genuine as they come. (6) Photo taken by Daniel Fry in 1964, Merlin, Oregon. Fry claimed at least 4 contacts with space people, including a joy ride from New Mexico to New York and back in 30 minutes. (7) UFO photo by Rex Heflin, Orange County, California, 12:30 p.m., August 3, 1965. A hoax. Computer enhancement shows the thread supporting the hubcap-sized object. (8) Photo taken March 12, 1967, west of Picacho Peak, by a New Mexico State University Student. (9) Photo taken near McMinnville, Oregon, May 11, 1950 by Mr. and Mrs. Paul Trent. A much-investigated photo - inconclusive. (10) Ralph Ditter, Roseville, OH, Nov 13, 1966 took a series of photos of a UFO that hovered over his house for 1.5 minutes. Two investigations concluded that the photos were hoaxes. (11) Piata Beach (Brazil), April 24, 1959. The photographer reportedly fell unconscious after the 4th picture and woke up with a note in his hand exhorting him to "Put an absolute stop to all atomic tests for warlike purposes. . ." (12) Yungay, Peru, 1967. No investigation. (13) Lenticular clouds over Santos, Brazil. (14) A fake UFO by Robert Shaeffer made of a banana split container and modeling clay. (15) Fake UFO made of two aluminum plates. (16) Fake UFO made of a cottage cheese container and an aluminum plate.

After the "honeymoon" of the 1950's encounters with UFOs and aliens took on a more sinister spin; not benevolent angels any more, some aliens seemed positively demonic.

Captions: (1) A spot in the Barr family's bean field about 40 feet in diameter featuring wilted bean plants. It was found the day after two teenage girls reported an oval-shaped UFO that hovered over approximately the same spot. Garrison, Iowa, July 13, 1969. (2) This photograph is one of many taken by Howard Menger in 1956 when he was contacted by space people from Venus. He claims many other encounters, with people from Mars, Jupiter, and Saturn. I have two conflicting reports about his wife: was she Connie, coauthor of two books about Menger's experiences, or was she Marla, from Venus? (3) Betty and Barney Hill's case is extraordinary for two reasons. First, theirs was the first well-publicised abduction, marking the start of a new trend: aliens were not necessarily angelic - they could be demonic as well. Second, the case is well-documented. The Hills had a close UFO encounter September 19, 1961, and could not account for 2 hours of their time that evening (nor 35 miles of driving). Two years later, under hypnosis, the Hills "remembered" many details of their abduction and examination by manlike beings. (This pattern is almost universal: abductees remember little at first, then embellish details over time.) (4) The cover of "Communion" by Whitley Strieber, which describes how the author's home was invaded and his mind taken over by aliens. This is a benchmark for another trend, the psychic-invasion encounter. (5) After a 1979 UFO encounter in France, Franck Fontaine and two friends became convinced that they had contacted aliens, and arranged a meeting for August, 1980. The aliens stood them up. Later, one of the men claimed that the story had been a hoax. (6) 39 members of the Heaven's Gate cult committed mass suicide in late March 1997. They believed that they would ascend to a spaceship that was accompanying comet Hale-Bopp. The cult had existed for more than 20 years, under the leadership of Marshall Applewhite. Many of the cult members had also undergone voluntary castration. Their web site is still online, unaltered since the suicides.

The authoritative source for the latest poop on matters concerning "space aliens" is the Weekly World News. Here is a sampling of the latest alien news, all true because it's published in a newspaper.

Captions: (1) A space baby rescued from a UFO crash in 1993. Just in: the aliens want her back. (2) Aliens zapped this radio dish because they didn't want us listening in on their conversations. [Gotcha on this one, W.W.N.: Actually, this is a photo of the old 300-foot Green Bank, Virginia, U.S. telescope, which did crumple into scrap on 15 November, 1988. There is no such observatory as the Rand-Wilson in Johannesburg, as claimed by W.W.N.] (3) We live in parallel universes: every human has an alien twin with similar characteristics. Uh-huh. (4) The alien lobby is supporting George W. Bush for president in 2000. [The same alien was photgraphed with Clinton in 1992]. (5) A biker watched in horror as an alien landed and started humping his Harley. (6) UFO stuck in an iceberg. (7) Proof positive that the Egyptians were aided by aliens. (8) In WWI, the Red Baron shot down a UFO. Two aliens fled the wreckage and scampered into the woods. (Note: I find W.W.N. articles starkly unbelievable but hilariously funny. Click here for the text that accompanies the above pictures plus other selected articles.)

Are They Out There?

The bottom line again: there is no credible evidence for extraterrestrial visits to earth. Investigations of UFO reports yield: Despite millions of UFO sightings and thousands of abductions, there remains not one single conclusive piece of evidence that extraterrestrials have visited Earth. Such an extraordinary claim requires extraordinary proof.

Messier 31, a galaxy like our own, about 100,000 light-years across, containing several hundred billion stars.

Given the vastness of the universe, surely they are out there, right? Well, yes, but the question is how out is "out there"? If we consider our galaxy, the Milky Way, we can estimate the number of advanced civilizations via a handy little formula called the Drake equation.

People's estimates will differ since some of the quantities in the Drake equation are fairly unconstrained since we have only one example (us) to look at. But the chance that another civilization is available to speak with us is nonzero, and so . . . we are searching: the Search for Extraterrestrial Intelligence, or SETI.

There are two main SETI strategies: eavesdropping and listening for beacons. In eavesdropping mode, we target nearby stars and listen intently for radio leakage. In beacon mode, it is assumed that the civilization will be broadcasting loud and clear, so the search is usually all-sky and confined to narrow frequency bandwidths.

NASA is putting little energy into SETI at the moment. Most of the SETI is getting done by the Planetary Society who have three ongoing radio-frequency searches, one optical search, and a program called SETI-at-home, which is a screen saver program that sifts through radio data while your computer is idle, looking for signals. If you want to help out, click on the above link.

Bottom line: no civilizations detected yet. 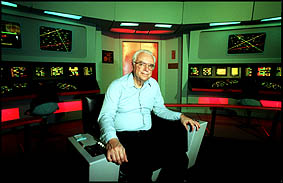